2016 130 min 27002 views
Shouya Ishida starts bullying the new girl in class, Shouko Nishimiya, because she is deaf. But as the teasing continues, the rest of the class starts to turn on Shouya for his lack of compassion. When they leave elementary school, Shouko and Shouya do not speak to each other again... until an older, wiser Shouya, tormented by his past behaviour, ...
AnimationDramaRomance

2013 97 min 23052 views
Kurapika became a Hunter to take vengeance on the Class-A crime group Phantom Troupe who massacred his clan for their unique eyes. The eyes of the Kurta clan turn scarlet in times of anger or emotional agitation and are considered the most beautiful treasures in the world. Kurapika continues to pursue the Phantom Troupe but an unknown party has stolen ...
AdventureAnimation

2013 97 min 24377 views
The strongest Hunters that once existed in the Hunters Association were split into "light" and "dark", and each walked down their respective paths. The "dark" side begins moving in order to massacre all Hunters! What actions will Gon take when the many crimes of Netero and the Hunters Association are unveiled...?!
ActionAdventureAnimation

IMDb: 7.8 1999 35922 views
window.location.href = 'https://drive.google.com/drive/folders/15dftXcm8aEHiHTClqHgN9GFiz68BvVIp' Hunter × Hunter is a 1999 television series and is part of the Hunter × Hunter media franchise. The story focuses on a young boy named Gon Freecss, who one day discovers that the father he had always been told was dead is in fact alive and well. He learns that his father, Ging, is a famous "Hunter": ... 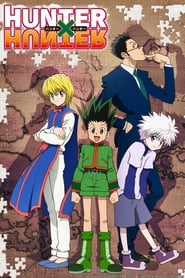 IMDb: 8.5 2011 168136 views
Twelve-year-old Gon Freecss one day discovers that the father he had always been told was dead was alive and well. His Father, Ging, is a Hunter—a member of society's elite with a license to go anywhere or do almost anything. Gon, determined to follow in his father's footsteps, decides to take the Hunter Examination and eventually find his father to ...