IMDb: 7.6 2007 25459 views
The year is 2307 A.D. Although fossil fuels have been depleted, humanity has obtained a new source of energy to replace them, in the form of a large-scale solar power generation system based on three huge orbital elevators. However, the benefits of this system are available only to a handful of major powers and their allies. In this world of ...
ActionAction & Adventure

IMDb: 8.1 2006 29041 views
Japan has been invaded and conquered by the Britannian Empire. Japan is now known as Area 11 and its citizens known as Elevens. The Britannian Empire takes away Japan's autonomous power and imposes its rule through the use of Knightmares. The Empire's rule has never faltered, but cracks have begun to show...
ActionAction & Adventure

IMDb: 8.3 2016 14497 views
This unconventional, surrealist comedy follows an exhausted high school boy who, despite multiple attempts from his friends, still manages to spectacularly... sleep. Much to the chagrin of the energetic (at times bossy) Oota, Tanaka is often found in a blissful state of lethargy, possessing the ability to doze off in any situation, especially in mid-sentence!
AnimationComedy 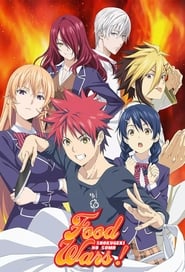 IMDb: 8.1 2015 72091 views
Yukihira Souma's dream is to become a full-time chef in his father's restaurant and surpass his father's culinary skill. But just as Yukihira graduates from middle schools his father, Yukihira Jouichirou, closes down the restaurant to cook in Europe. Although downtrodden, Souma's fighting spirit is rekindled by a challenge from Jouichirou which is to survive in an elite culinary school ...

IMDb: 7.7 2015 21048 views
The story follows Eren Yeager and Mikasa Ackerman entering Titan Jr. High, a school where humans and Titans study in the same area in coexistence. Because of a "traumatic" event, where the Colossal Titan ate his lunch back in middle school, Eren hates the Titans, and is constantly trying to find a way to rid the earth of their kind. ...