IMDb: 8.4 2001 67997 views
Asakura Yoh is a shaman, a person who communicates with ghosts. He enters the Shaman Fight, for whoever wins the tournament gets to commune with the Great Spirit, God . . . that and his fiance Anna wants to be the wife of the Shaman King. Helping him are his friends Manta, Horo Horo, Ryu, and his samurai ghost partner, ...
ActionAction & AdventureAdventure

IMDb: 8.6 2001 30580 views
Baki Hanma is a young fighter who yearns to follow in the footsteps of his father, Yujiro, and become the strongest fighter in the world. Through that he trains tirelessly and fights constantly to hone his skills and develop his body to achieve these goals. Many intense battles lay ahead of Baki as he goes about his quest to be ...
Action 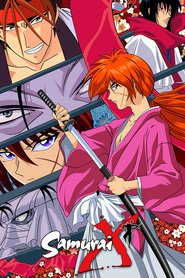 IMDb: 7.8 2001 8160 views
The Meiji Era was one of great renewal for Japan, where swords and killing were outlawed. However, many survivors from the time of Revolution still live, lurking in the shadows and waiting for a chance to use their killing blades again. Only Kenshin Himura, formerly one of the most brutal of killers, hopes to keep his swordsman's honor and still ...