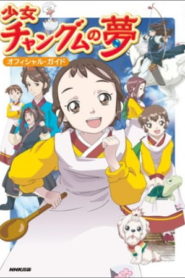 Jang Geum’s Dream is a Korean animation. It is a production by Munhwa Broadcasting Corporation. The animation was done by Sonokong and Heewon Entertainment. The animation centers on Jang Geum, who enters the Royal Kitchen as an apprentice court lady. The show is a spinoff from MBC’s mega-hit historical drama Dae Jang Geum. The animation program has been sold to Tooniverse, resulting in the broadcast of a second series in 2007.